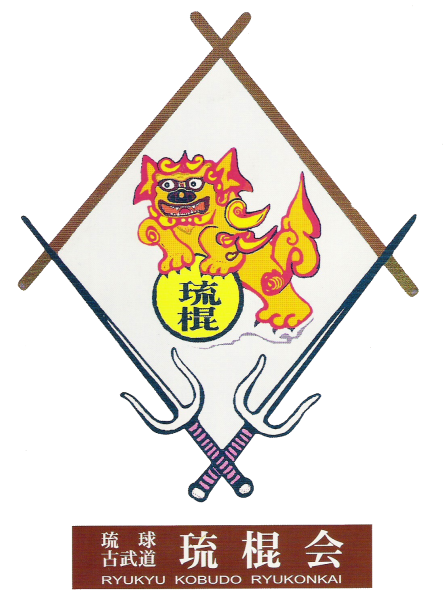 It is extremely difficult to find legitimate kobudo classes in Sydney Australia that have direct lineage to Okinawa Japan.

Bujutsu under Sensei Mark Szalajko is directly linked to the RyuKonKai honbu in Uruma Okinawa.

We are the largest RyuKonKai dojo in Australia, and the only dojo in Sydney Australia that has a full time licensed RyuKonKai instructor.

琉is for Ryukyu Islands which was the old name for Okinawa.

会Kai is an association or meeting

The Okinawan Ryukyu Ryu Kon Kai Association has devoted itself to the practice and training of various martial arts weapons such as: Bo, Sai, Tonfa, Tekko, Nunchaku, Kama and Eku, because the association regards Kobudo as a traditional Budo just like Karate.

RyuKonKai Karate and Kobudo stresses the importance of the skill of perfect self defence and the power to kill the opponent with a single blow and urges it’s members to master them through the hard training of one Kata after another.

At the same time, the association emphasises the importance of acquiring the mental and spiritual power – the sense of life and death – through their training. The beauty of Kata and Budo is developed into the higher level of beauty and power only through stability and smooth movement of the lower part of the body. The Katas of Karate and Kobudo are inevitably essential to Budo from the historical point of view.

Up until 40 years ago, each master learned only one kata and took it to a country and taught it there. Those masters were quiet old and because they were dispersed around the island, it was quite difficult to collect the Katas of the masters. The Katas were, however, finally collected and the collection of the Katas became the foundation of the RyuKonKai.

Students who train Ryu Kon Kai at Bujutsu Martial Arts and Fitness Centre, are lucky enough to train a traditional and legitimate system of karate and kobudo exactly like it is taught in Okinawa.

Sensei Mark travels to Okinawa two times a year where he trains with Grand Master Kotaro Iha and Master Mitsutada Iha. Sensei Mark is proud to uphold the Okinawan traditions in his teachings. He is also very proud of the fact that all of his Ryu Kon Kai grades have been awarded in Okinawa.

RyuKonKai Dan grades are registered in Okinawa and are internationally recognised.

“You should not love to fight, but not, even for a moment, forget to prepare for fighting.”
– (Miyamoto Musashi, Go rin no Sho , The Book of Five Rings).

You can see what a typical RyuKonKai class at Bujutsu looks like in the video below.

1. Be civil, courteous, disciplined and well behaved.
2. Aim to train your mental and spiritual power as well as  your physical power.
Endurance is the key to success.
3. Respect your seniors and love your juniors. Regard every member of Dojo as
brothers and sisters and treat them as such.
4.  Try to master the most efficient skill of self-defence by preparing for any emergency. 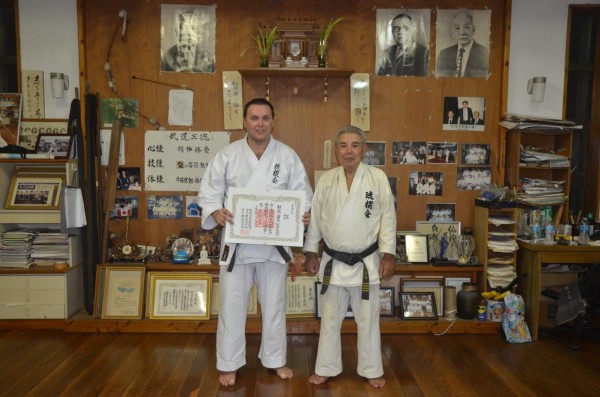 Mr. Iha was interested in combative sports even when he was small and in high school, he joined the Judo club and also started to practice at a private dojo in town. His success was limited because of his small stature. After graduation from High School, Iha Sensei decided to study Karate, feeling that this would give him the advantage in a fight despite his smaller physique. He soon found out that larger students also had an advantage over smaller practitioners in Karate. Further thinking following these events led Iha Sensei to Kobudo, especially the Bo, where he knew that weapons, particularly the length of the Bo, would give him an advantage. Mr. Iha has been fascinated by the bo ever since.

Kotaro Iha is 10thDan and President of Ryu Kon Kai, Ryukyu Kobudo Association and is a designated Intangible Cultural Asset of Okinawa.

On his quest to master the art of Kobudo, he trained under various masters who each specialized in certain weapons: 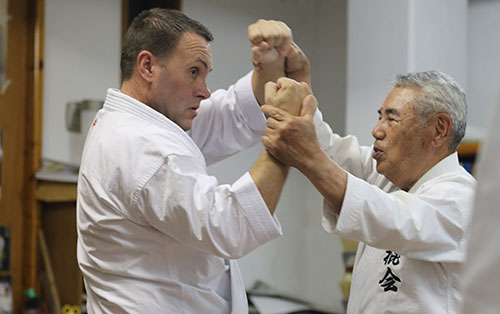 Our RyuKonKai grades are internationally recognised and registered in Okinawa.

The RyuKonKai syllabus is protected. There are many secrets of RyuKyu Kobudo that are only known by those who train in this ancient art.