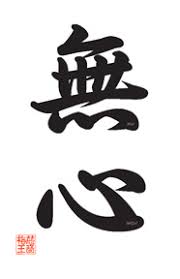 Mushin is a mental state that is strived for by traditional meditators and high level martial artists.

Mushin has been around since the early 1600’s when the Zen Buddist Takuan Soho advised samurai clans to adopt this state of mind.

Despite the fact that mushin is very relevant to all martial arts styles, including to name a few: karate, muay thai kick boxing, mma, bjj, iaido, jodo and kyudo, it is a concept that most martial artists have never heard of.

But mushin is a concept understood and practiced by high level traditional Japanese martial artists who have moved beyond just the physical aspect of their art and who also work on the spiritual side of their art.

You are probably wondering what does mushin mean. I have to say that mushin is a very difficult concept to explain at a level that is able to be used and put into practice.

Mushin is a shortened form of the zen concept, mushin no shin, which means the mind without mind.

At its simplest level mushin is simply having an empty mind. At advanced levels of mushin it is much more.

Mushin is something that all martial artists, regardless of style should strive for. Mushin involves calming our minds to a state of mind where the mind is not fixed on or occupied by any thought or emotion. This leaves our mind free from distraction and able to maintain alertness of everything around us without fixating on one particular issue. This allows our mind to flow rather than fixate on one particular thing.

When we obtain mushin, our mind is without fear, anger or ego, as well as any other external distractions. In mushin, martial artists stop thinking about what needs to be done in combat and allow their bodies to take over.

These analogies could easily be worded to reflect a fight in a ring or cage, as well, as many law enforcement scenarios.

Mushin allows, the martial artist to be able to think without thinking and respond appropriately. This is why I say that this is a concept for highly skilled advanced martial artists. If the physical side of your art has not been repetitively trained over many years, your body will not be able to automatically respond to the threat.

For those who practice mushin, there is no place to put your mind on, your mind should be aware and free. The Japanese saying, mizu no kokoro is very relevant to mushin and means, mind like water.

Mushin is a difficult task that takes years and years of training to be able to achieve in a high stress situation.

Now that you have any idea of what mushin is, you can spend the next 10 years trying to perfect mushin in practice.

Today we ran our first ever kids boxing class. Thi

Spring has arrived and the Big Ass fans are on. #b

Our kids BJJ classes are very popular. The kids ha