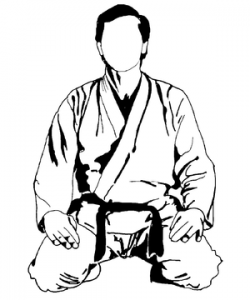 It is with great pleasure to have the opportunity to write about the significance of the seiza position in Karate-do. I have given my utmost effort and scrutiny of every word in the hope of transmitting the art as accurately as I could base on my limited knowledge. I hope this can help to clarify some misconceptions regarding seiza for whomever is interested. Hopefully, a person of greater skill and knowledge will come along someday and make the necessary amendments to further our Karate-do knowledge.

that represents the Japanese cultural. As a result, the practice of sitting in the seiza position has also become a fundamental posture in Japanese Budo (武道) that reflects a practitioner’s

respect, alertness and competence in their chosen art. Budo is a term that includes a diverse range of traditional Japanese martial arts and so it is not surprising to find different disciplines having their own unique way of performing seiza. However, the spirit and essence of seiza remains constant although the performance of seiza may vary across disciplines. Due to the limited scope of this paper, we will only concentrate on the practice of seiza in Karate- do. The importance of seiza cannot be over emphasized because one can infer a karate-ka’s(practitioner of Karate-do) level of ability just by observing the way he or she moves in seiza.

One needs to understand the origins of seiza to fully appreciate its significance in the Japanese culture and ultimately in the dojo. Hence, the practice of seiza is not merely a fancy way of sitting but conveys mannerism and a conduit to improvement in Budo and one’s self- development.

The floor culture can trace its origins in ancient China from the Shang dynasty (1744- 1046 B.C) to the Tang dynasty (618-907 A.D). This cultural influence eventually spread to Japan where the practise had further developed into a more refined manner in modern times. The ideogram for sitting (坐) consist of two people sitting on the earth and there were many methods of sitting on the floor. The floor culture eventually disappeared from mainstream Chinese culture by the end of the Song dynasty (960-1279 A.D) due to increase contact with other Eurasian continental cultures. However, the floor culture presisted in Japan and the current seiza position has been in existence in for a long time but it was not given its name until much later in the Meiji period (1868-1912 A.D).

Painting of Confucius teaching his students who are sitting in seiza. (Zhou dynasty, China, 1046 – 256 B.C).

There are many sitting positions and one of these sitting styles is known as “Agura” (胡坐) where a person sits with their legs crossed and relaxed. The agura position was normally used during informal situations or by someone of higher authority. Consequently, subordinates were required to sit in the seiza position because it demonstrated respect and allowed the subordinate to stand up quickly to perform tasks ordered by their superior. Thus, the seiza position is not intended to be relaxed. It was a position of alertness and readiness.

French illustration depicting the Shogun sitting in agura while his ministers sit in seiza denoting their difference in rank. (Meiji period, Japan, 1868-1912 A.D).