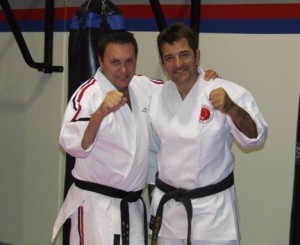 Tonight at the Budoshinkai Karate Jitsu Presentation Day, I was awarded the title of Renshi by my long term teacher and mentor Hanshi George Adams who is the head of Budoshinkai.

I am honoured to have received this title.

What does Renshi mean?

Renshi was one of the three Shogo titles awarded by the Dai-Nippon Budoku-kai (greater Japan Budo Encouragement Federation established in 1895 in Kyoto), with the other two being Kyoshi and Hanshi.

The awarding of a shogo title is based on each individual’s knowledge, teaching ability and the outstanding development of character through the study of the martial arts. These titles are much more difficult to achieve than the grades and are not automatically assigned with rank or seniority. Before a shogo title is awarded, the candidate must have made significant contributions to the martial arts community at large.

Much has been written about the meaning of Renshi and there are some differing views about what Renshi means. In short, Renshi means a polished teacher, polished expert or polished master of a particular style of martial art.

You cannot simply give or take for yourself one of these titles. You must be awarded this title by an appropriately qualified senior in your style of martial arts.

It is important to note that Renshi is a title. It is not a rank and it is traditionally not dependent on rank. However, in modern times, some organisations require you to hold a specific rank before the title can be awarded.