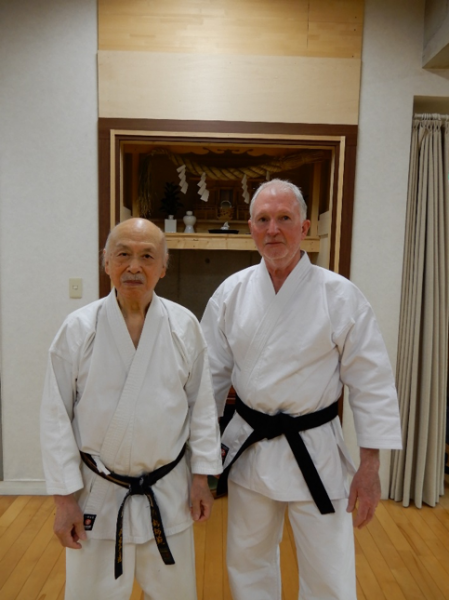 Soke Kawanabe Kenjiro, Hanshi, 89 years young, 10th Dan ShotoKan-ryu Karate-Do, Shin’ei Taido and founder of Hachiriki-ryu Karate-Do, is one of the last great grandmasters who studied directly under, and was a senior student of, the father of modern karate and Shotokan-ryu’s founder, Funakoshi Gichin Sensei. Soke Kawanabe also studied extensively under Inoue Hoken Sensei, master of Daito-Ryu Aiki-jujutsu, co-founder of Aiki-Budo and Aikido with his uncle, Morihei Ueshiba, and the founder of Shin’ei Taido; Okuyama Tadao Sensei, noted Shotokan-ryu and ken Master, and the author of the Kotodama Tsurugi, a treatise based on the Hachiriki [eight powers or forces]; and Okuyama Ryuho Sensei, master of Daito-Ryu aiki no jutsu and founder of Hakko-ryu jujutsu.

Hanshi Laurie Gray, Kawanabe Sensei’s Australian representative and Saiko Shihan for Kawanabe Budo Australia, recently celebrated his 52nd year as a martial artist. He is graded to 8th Dan in Shotokan-ryu Karate-Do, 2nd Dan in Goju-Kai Karate-Do, and 5th Dan in Aiki-Budo, which he has studied for the past 25 years. He travels to Japan on an annual basis to train one-on-one with Kawanabe Sensei at the Kawanabe Budokan in Tokyo.

Congratulations to one of my teachers. IHA Mitsu

Best of luck to Brian who steps into the ring for

This Thursday our 6am Boxing class with 3 times wo