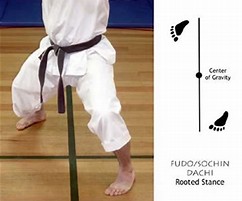 The origins and concept of Fudō 不動 permeate all levels of Japanese culture and society. It is a term often used in Zen Buddhism to represent a mental state; one of immovability. It is not intended to be interpreted literally, but is intended to focus on a total and unobstructed awareness of everything, thus not moving with or fixed upon something. It is akin to the military concept of situational awareness.

In the martial arts the character Shin 心, meaning spirit or will, is often added to the characters for Fudō to become Fudō-shin 不動心, a term meaning calm or immovable spirit, even when faced with danger, without fear or confusion and one that does not dwell or become fixed on anything. This was the highest attainment of spiritual skill and is only achievable when the mind is totally focused on the totality of sensory input, and free from thought and emotion – detached but aware and present. This concept is closely related to the martial arts term Mushin, which is often used to mean ‘without mind’ – not pre-occupied by thought or emotion.

Many Japanese Samurai revered the deity Fudō Myō-ō 不動明王. They saw themselves as guardians of order at a time when the nation was besieged with disorder. Fudō Myō-ō also represented the highest attainment of the Samurai state of mind; the mind does not move and the body is not unsettled, even when surrounded by danger.

Fudō Myō-ō is one of the important and venerated deities of Japanese Buddhism. His statue can be seen in so many places in Japan that it is not uncommon to find one near a waterfall or simply by a mountain path. His name literally means ’The Immovable Wisdom King’. He is the guardian of Buddhism and one of the five Wisdom kings along with Gōzanze, Gundari, Daiitoku and Kongōyasha. As such, he is the central figure and when the Five Wisdom Kings are represented together he usually is in the middle. 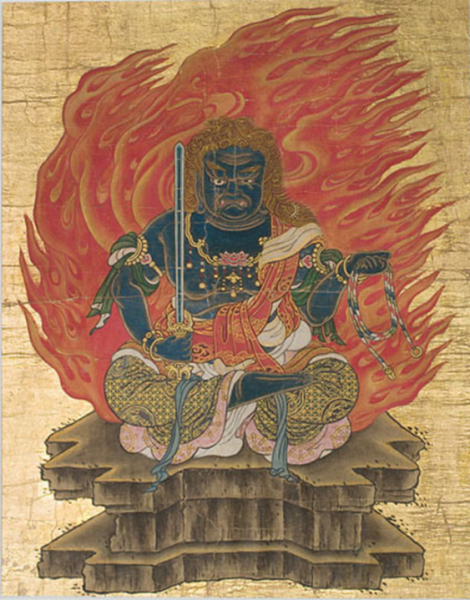 In Osaka, Japan, one of the most significant Fudō Myō-ō sites is tucked away not far from Dotombori Bridge. Hozen-ji 法善寺 temple, built in 1637 and a relic of the Edo era, pays homage to Fudō Myō-ō.

No coins are tossed in offering at Hozen-ji, as they are at other Japanese temples. Instead worshippers make their supplications and then splash some water on the statue of the deity that is the heart of this temple. Due to the frequent dousings, the statue is now blanketed by a soft, green carpet of moss. 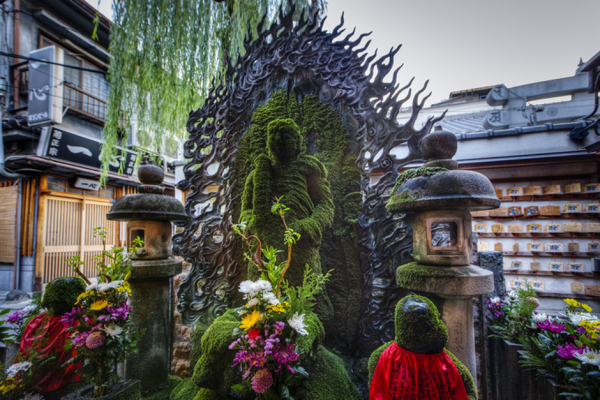 Myō-ō 明王 is the Japanese term for a group of warlike and wrathful deities known as the ‘Mantra Kings’, the ‘Wisdom Kings’, or the ‘Knowledge Kings’. Introduced to Japan in 9th century, Myō-ō statues appear ferocious and menacing, with threatening postures and faces designed to remove all obstacles to enlightenment and force evil to surrender.

Fudō Myō-ō carries a ‘kurikara’, or devil-subduing sword, in right hand (representing wisdom cutting through ignorance); holds a rope in left hand (to catch and bind up demons); often has third eye in forehead (all-seeing); and is often seated or standing on rock (because Fudō is ‘immovable’ in his faith). Fudō’s aureole is typically the flames of fire, which according to Buddhist lore, represent the purification of the mind by the burning away of all material desires. Fudō Myō-ō is reputed to convert anger into consideration, cutting through negative feelings and demons to liberate us from suffering through self-control, while battling evil with his immovable faith and compassion.

Fudō-dachi 不動立, often referred to as the immovable or ‘rooted’ stance, is also called Sōchin-dachi 壯鎭立 in deference to the kata Sōchin, in which it features prominently.
In his book, ‘Dynamic Karate’, Master Nakayama suggested that “… Fudō-dachi … is a combination of the front stance and the straddle leg stance … [there is} a great similarity to the straddle leg stance except for the difference in the direction in which the feet point. The rooted stance is a firm and strong stance, giving the impression of a deeply rooted tree. Merely by changing the direction in which the feet point, this stance can be turned into the straddle leg stance (Kiba-dachi). To assume this stance, both knees must be bent to the same degree. The rooted stance is effective for blocking a strong attack and delivering an immediate counter-attack. In this stance exert force outward at the knees and distribute the body weight equally between both legs.”

Fudō-dachi is reputedly one of the oldest karate stances, pre-dating Zenkutsu-dachi. Fudō-dachi is certainly one of the most natural stances particularly for blocking, evasive techniques and tactics. It actually shares distinct characteristics with the narrower and more conventionally mobile ‘boxer’s’ stance. While there are three recognised variations on the same theme, the stance is generally based on a position similar to Kiba-dachi, turned 45 degrees to the side with the head looking forward. The three major variations are based on the angle of the feet, weight distribution and the width of the stance.

In his book ‘Karate – The Art of Empty Hand Fighting’, Master Nishiyama describes Fudō-dachi as a “… diagonal straddle leg stance with the straddle leg stance twisted forward. The front knee is over the big toe, while the rear knee is about one foot forward of the big toe. Body weight is evenly distributed on both legs and both knees are bent and tensed outward. Legs are about twice shoulder with apart, or as seen from the front, shoulder width apart. This is a strong stance both to the sides and front and to the rear and is effective both in attack and defence. As in the straddle leg stance, the bowing of the legs is very important.”

With the exception of the kata Sōchin, some of the more advanced Shotokan-ryū kata, such as Unsu, Chinte and Gankaku Sho, employ Fudō-dachi to transition to counter striking and other attacking techniques.